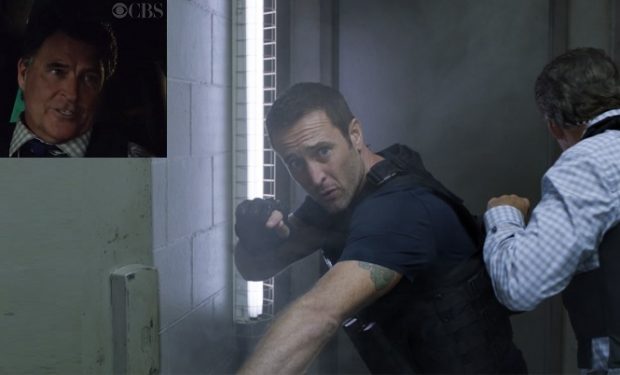 In the Hawaii Five-0 episode “Ho‘opio ‘ia e ka noho ali‘i a ka ua” (translated “Made Prisoner”), a dangerous hurricane hits Oahu and the governor has called a state of emergency. During the storm, Commander McGarrett (Alex O’Loughlin) gets a call from FBI Special Agent Sam Collins who reports that a high-level fugitive, the serial killer known as El Diablo (Raoul Trujillo), has been apprehended. McGarrett congratulates Collins but he’s not calling for compliments. The problem is, El Diablo was supposed to be transferred to a super max prison but due to the storm, all planes are grounded. And his safe house is being forced to evacuate. They’re bring the serial killer to McGarrett.

[Watch McGinley on Married with Children]

FBI Agent Collins is portrayed by Ted McGinley. The veteran actor is known for his TV roles on Hope & Faith (Faith’s husband Charley Shanowski), Married with Children (neighbor Jefferson D’Arcy, SEE LINK ABOVE), The Love Boat (ship’s photographer Ace Covington Evans), Happy Days (Howard and Marion’s nephew Roger Phillips), and in a variety of films including Pearl Harbor (Army Major) and Revenge of the Nerds (Stan Gable), among others. Fun facts: McGinely was the captain of the USC water polo team, and took Brooke Shields to her senior prom at Dwight Englewood in 1982. In real life, he’s married to his wife of 27 years, actress Gigi Rice (The John Larroquette Show). Hawaii Five-0 airs Fridays at 9 pm on CBS, right after MacGyver and right before Blue Bloods.