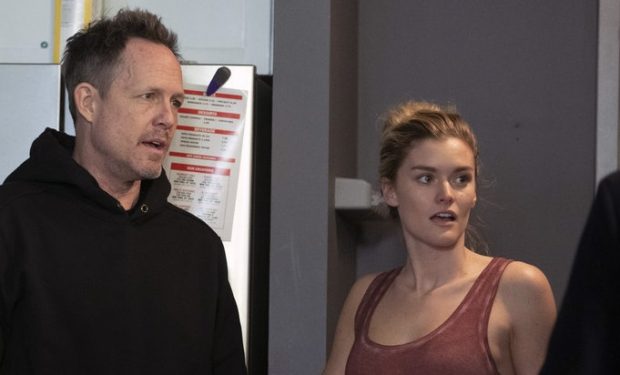 In the Law & Order: Special Victims Unit episode “Facing Demons,” when a suspected child molester is found dead, the team finds photos of his victims over the years — all young boys under the age of 12. During the investigation, Benson (Mariska Hargitay) recognizes one of the boys which leads her to the home of her ex Cassidy (Dean Winters). This episode is a sequel to the “Chasing Demons” episode when Cassidy confessed to Benson and Stone (Philip Winchester) about being molested as a child by his little league coach. In “Facing Demons”, Benson meets Cassidy’s gorgeous neighbor (maybe girlfriend?) Madison.

Cassidy’s girlfriend/neighbor Madison is portrayed by professional dancer and model Virginia Preston. This is the 5’7” Wilhelmina model’s acting debut. She’s been featured in ads for Ally Bank, Classpass, Woosh Beauty, among others — see photos and videos below. Law & Order: Special Victims Unit airs Thursdays at 10 pm on NBC, right after Will & Grace.

Virginia is doing yoga at Breakup Bootcamp…thanks to Ally Bank