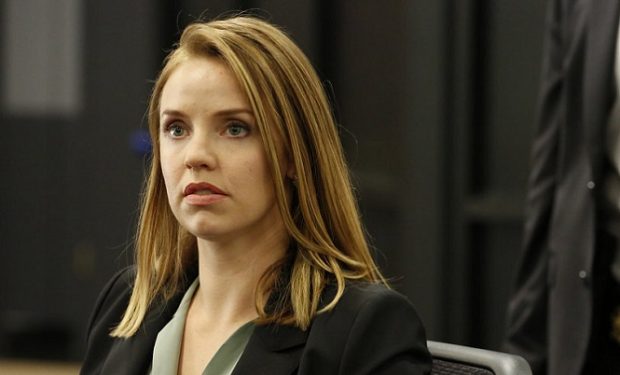 THE ENEMY WITHIN: Kelli Garner (Will Hart/NBC)

The Enemy Within is a new investigative thriller about a CIA operative turned traitor, Erica Shepherd (Jennifer Carpenter, Dexter). While she’s serving a life sentence in a federal supermax prison, an elusive criminal is killing CIA agents. FBI Agents Will Keaton (Morris Chestnut, Rosewood) and Kate Ryan turn to Shepherd for help in tracking down the assassin.

FBI Agent Kate Ryan on The Enemy Within is portrayed by actress Kelli Garner. She’s known for her roles in the 2015 TV movie The Secret Life of Marilyn Monroe (as Marilyn), Looking (Megan Murray), Pan Am (Kate Cameron), My Generation (Dawn), and in films including Lars and the Real Girl (Margo), Born Killers (Archer), Thumbsucker (Rebecca), and Martin Scorsese’s The Aviator with Leo DiCaprio (Faith Domergue, see photo below), among others. Fun fact: Garner plays the girlfriend in the 2005 Green Day video “Jesus of Suburbia”, see below. The Enemy Within airs Mondays at 10 pm on NBC. [BONUS: Stream any NBC show watch LIVE on any device with NBC UNIVERSAL app available here. Download is FREE.]