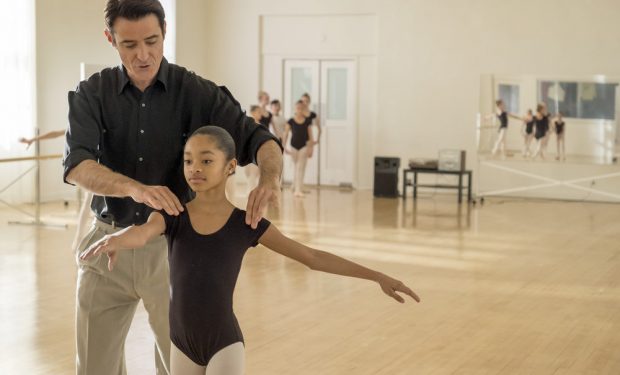 THIS IS US: Akira Akbar, Goran Visnjic (Ron Batzdorff/NBC)

In the This Is Us episode “Our Little Island Girl,” Beth Pearson (Susan Kelechi Watson) and her cousin Zoe (Melanie Liburd) return home to take care of Beth’s mother Carol (guest star Phylicia Rashad). The visit sparks an unexpected realization for Beth. While reminiscing about taking ballet classes as a little girl, which she loved, Beth accuses her mother of “taking it away from me.” Her mother responds by saying “You had gone as far as you could go.” Hint: This is way before ballerina Misty Copeland became the first African American woman to be promoted to principal dancer in American Ballet Theatre’s 75-year history (in 2015).

[Watch Visnjic in The Girl with the Dragon Tattoo]

In the flashbacks, young Beth is portrayed by Akira Akbar. Beth’s ballet teacher Vincent is portrayed by Goran Visnjic. The 6’4” Croatian-born actor is known for his roles on Timeless (villainous Garcia Flynn), Extant (John Woods), ER (Dr. Luka Kovac), and in films including The Girl with the Dragon Tattoo (Armansky, see link above), Beginners (Andy), Elektra (Mark Miller), Ice Age (the voice of Soto), Practical Magic (Jimmy Angelov), and in the 1998 Madonna music video “The Power of Good-bye” as the boyfriend (see below). This Is Us airs Tuesdays at 9 pm on NBC.