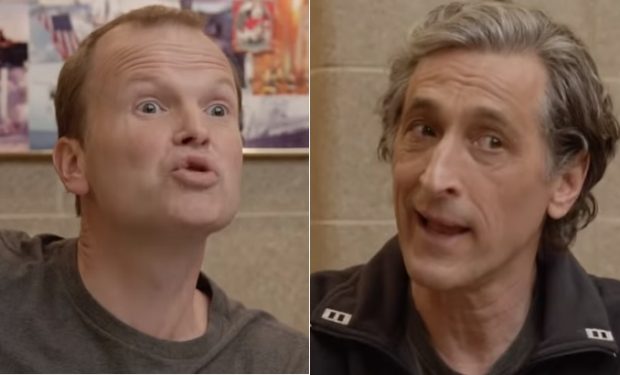 On the Chicago Fire episode “It Wasn’t About Hockey,” Brett, Foster and Kidd take a road trip to Indiana for a getaway but end up driving into the aftermath of a bus accident involving a boy’s hockey team. Meanwhile, back at Firehouse 51, everyone is cooking up a storm in the kitchen for the annual chili cook-off. The two paramedics who are filling in for Brett and Foster complain about the smell. When Herrmann (David Eigenberg) says “You’re just fill-ins, you don’t get any say,” the blond paramedic turns to Captain Casey (Jesse Spencer) and says ‘That’s discrimination.” Casey disagrees.

The paramedics are portrayed by the comedic duo of T.J. Jagodowski and Dave Pasquesi, both alums of The Second City. Jagodowski is best known for his improv work in the Sonic Drive-In TV commercials with Peter Grosz. Pasquesi is known for his roles on Veep (Selina’s ex Andrew Meyer, SEE LINK ABOVE), The Mob Doctor (Dr. Ian Flanigan), and in the 2009 Tom Hanks films Angels & Demons as Claudio Vincenzi. Together, the improv legends star in the series TJ & Dave which is currently available on Vimeo. Chicago Fire airs Wednesdays at 9 pm on NBC, right after Chicago Med and right before Chicago P.D. [BONUS: Stream any NBC show watch LIVE on any device with NBC UNIVERSAL app available here. Download is FREE.]