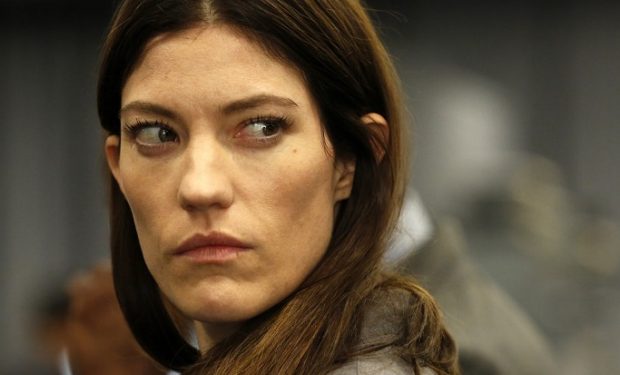 THE ENEMY WITHIN Jennifer Carpenter as Erica Shepherd (Will Hart/NBC)

NBC is introducing its new investigative thriller TV series The Enemy Within right after the Season 16 premiere of The Voice. The protagonist of The Enemy Within is former CIA operative Erica Shepherd. After ratting out her fellow agents to a terrorist (who threatened to harm to her daughter), Shepherd is now serving life in a federal supermax prison. But she’s not left idle. The FBI recruits her to help them track down an elusive, dangerous criminal who’s already killed a dozen CIA agents.

Erica Shepherd is portrayed by actress Jennifer Carpenter. She’s known for her roles on Limitless (Agent Rebecca Harris), Dexter (Dexter’s sister Debra Morgan), and in films including Quarantine (Angela), The Exorcism of Emily Rose (Emily Rose), and White Chicks (Lisa), among others. Fun facts: The Juilliard School graduate made her Broadway debut in the revival of Arthur Miller’s “The Crucible” with Laura Linney and Liam Neeson. The 5’9″ actress ran the 2012 New York City Marathon with her other Dexter co-star Jonny Lee Miller (Elementary), completed it in 3:34 (her best time yet), and together they helped to raise $185,972 for the non-profit organization Every Mother Counts. In 2013, Shepherd told Women’s Running magazine: “I run every day. It’s like medicine. At Julliard, we’d train 12 hours a day. After rehearsal, you’d just walk right back upstairs and go to sleep. That’s when running became my meditation.” The Enemy Within airs Mondays at 10 pm on NBC.