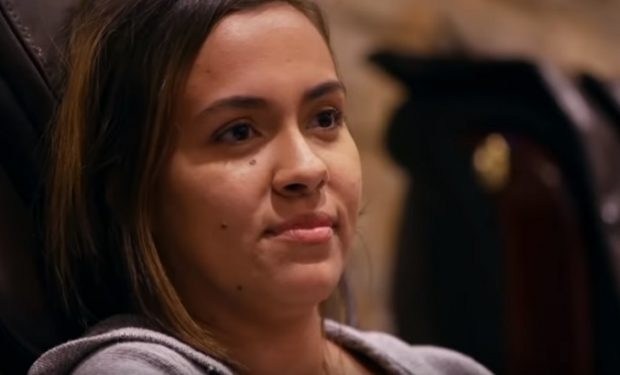 In the Teen Mom 2 episode “Don’t Wanna Go Home,” while Jenelle addresses rumors spurred by the 911 call, Briana gets a pedicure with her friend Shirley. While soaking her feet, Briana gets a text that makes her smile. When Shirley asks who’s texting her, Briana admits it’s John from New York.

Briana and John met a few months ago when filming in the New York. “They call him chicken guy because we met at a chicken place.” Briana tells Shirley, with a smile, “He f—king stalked the s— out of me.” When Shirley asks, “What kept this going?” Briana says, “I dunno, we just vibed.”

She reveals that they’re going to film the show together “and I don’t know what’s going to happen.” Briana is leaving her daughters with her mom. When she says “He still hasn’t met the girls,” Shirley advises “not to introduce them yet.” Briana agrees, and says “they’re not meeting anytime soon so let’s not even think about it” – like Shirley was the one who brought it up. Shirley says, “It’s going to happen eventually…if it’s serious.” Teen Mom 2 airs Mondays at 9 pm on MTV. [Related: Teen Mom Briana DeJesus’s Daughter Nova Calls Aunt Brittany “Lazy”]