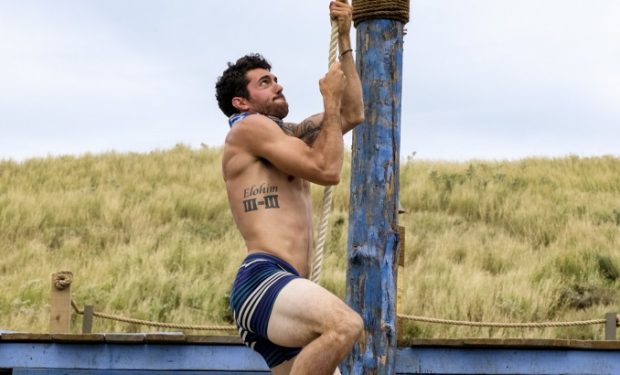 Survivor host and executive producer Jeff Probst returns to the Mamanuca Islands of Fiji for Season 38 which is themed “Edge of Extinction.” Of the 18 castaways, four are returning fan favorites. But none of them know about this season’s new twist. When a castaway is voted off and leaves tribal council, he or she gets a second chance. They can either leave the competition for good or “grab the torch and get in the boat”. The boat takes them to an abandoned island called “Extinction Island” where Probst says castaways will “get a little deeper psychologically, a little deeper spiritually.” That shouldn’t be a problem for castaway Chris Underwood. The 25-year-old solar salesman from Myrtle Beach, South Carolina reveals his spiritually with a big tattoo on the side of his torso. It reads: Elohim III = III.

[Watch any Survivor season whenever you want]

Elohim is a name for God used often in the Bible. The word appears more than 2,750 times in the Old Testament. Elohim appears 33 times in the book of Genesis. Bible Study Tools says Elohim doesn’t just refer to the one true God but is also used to refer to a person (or angel) who demonstrates or emphasizes God’s power and might. The number 33 in numerology also refers to the word Amen. Survivor 38 premieres Wednesday, February 20 at 8 pm on CBS. [CBS streaming: Watch Survivor and/or any CBS show through Amazon Prime or CBS ALL-ACCESS. Both options offer free trials.]