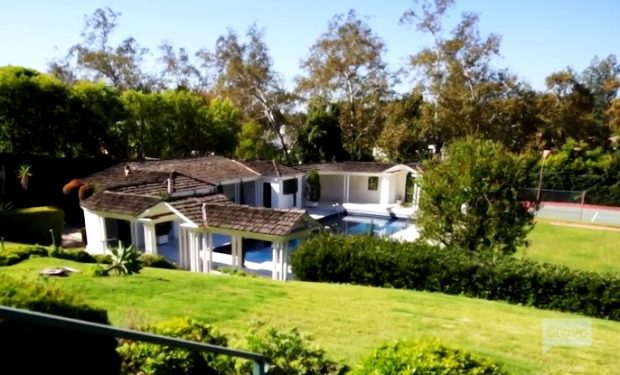 In the Million Dollar Listing: Los Angeles episode “Brother Dearest,” while Flagg and Bobby work together to sell a new condo development in West Hollywood, James and David are led to the famed house where much of the 1981 the movie Mommie Dearest starring Faye Dunaway as Joan Crawford was filmed — see film link below. When they bring a potential buyer to the house, he inquires about the neighboring properties. When David points out that the north side is “the old Playboy bunny ranch” — he’s referring to Hugh Hefner’s legendary Playboy mansion — the potential buyer says “I need both properties.” Four doors down from the Mommie Dearest home is the old Aaron Spelling estate, The Manor, which was put on the market (again) in 2016 for $200 million.

In April 2017, the six-bedroom Mommie Dearest home in the Holmby Hills neighborhood was sold for just under $20 million. When it was originally listed in 2016, the asking price was $35 million. The Mommie Dearest house was sold just months after the Playboy mansion was sold for $100 million in 2016. The owner of the Playboy mansion is billionaire Daren Metropoulos, heir to the Hostess fortune and former owner of Pabst Brewing Company. Million Dollar Listing: Los Angeles airs Thursdays at 9 pm on Bravo. [BONUS: Stream any BRAVO show through the BRAVO Digital App found here. Download is FREE.]