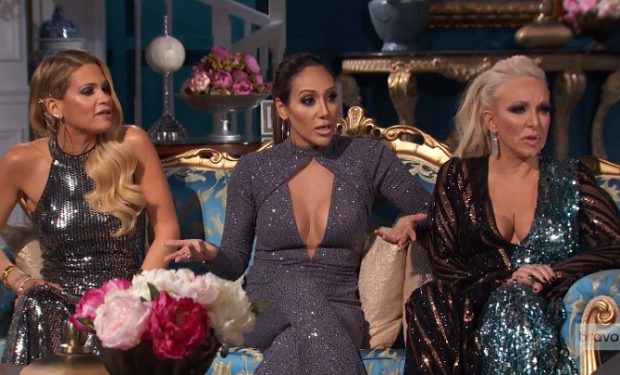 On the Season 9 reunion of The Real Housewives of New Jersey, while Teresa Giudice goes after new wife Jackie Goldschneider and the other new wife Jennifer Aydin insults Margaret Josephs and the entire Midwest with her comments about their trip to Oklahoma, Melissa Gorga is sitting pretty in a glittery grey jumpsuit. The one-piece clings to Melissa’s body in all the right places. Her long hair is pulled back in an elegant ponytail which shows off her big gold hoop earrings.

Last month, while taping the reunion, Melissa posted a photo from the RHONJ set and wrote that the reunion is “definitely one of the most aggressive I’ve ever seen.” However, the glamorous Gorga doesn’t look ready for war: she looks like she’s ready to jump on a stage and sing and dance. When she posted the photo (see below), many of her 1.7 million followers noted a resemblance to the late Latina pop star Selena, who also favored glittery jumpsuits. The $2520 jumpsuit Melissa Gorga is wearing is by Walter Collection by Walter Mendez and Ryan Pastros, who also design for Jennifer Lopez, who famously played Selena in the 1997 biopic Selena. (Beyonce, Mariah Carey, and Britney Spears are fans and clients of Walter Collection, too.) The Real Housewives of New Jersey airs Wednesdays at 9 pm on Bravo.

If this isn’t the best photo bomb 💣 ever I don’t know what is! The Reunion is gonna blow your mind. Definitely one of the most aaggressive I’ve ever seen. I am actually still confused 🤷‍♀️ What I’m not confused about is this gorgeous jumpsuit That @waltercollection designed!! It is beyond amazing💙 @bravoandy

What an amazing 3 years it has been! @jlo #allihave

@jlo celebrating her 100th All I Have Vegas show wearing a custom #waltercollection catsuit. #jlo #allihave