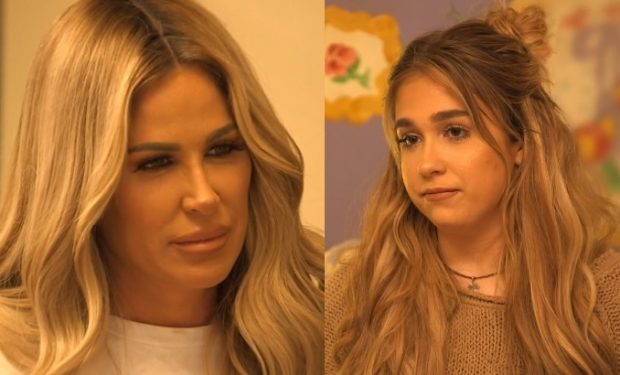 On the Season 7 premiere of Don’t Be Tardy…, viewers meet Ariana’s new boyfriend Collin. The 17-year-old met him at a football game during her sophomore year. “Collin is definitely my first real boyfriend,” she explains. “I’ve never felt like this before. I really love him.” Ariana is video chatting with Collin when her parents, Kim and Kroy, barge into her room. Kim likes Collin, and Collin knows how it works. He tells her, “I love you too, Miss Kim.”

When Ariana hangs up with Collin, Kim asks what the plan is for prom. When Ariana says they plan to hang out at Collin’s after the prom, Kim tells Ariana, “prom is known for people trying a little…” and “that’s why I’m telling you to save yourself for life.” Kim also says she’s never had sex and that her six children came after God touched her.

Kim says “I’ve always wanted to be open with my kids” but “Ariana is a little more private and likes to hide things.” She has spoken to Ariana in the past about sex but prom is just a few days away “so we’re doing sex ed 3.0, sweetie. I’m here, we’re talkin’.” Don’t Be Tardy… airs Sundays at 9 pm on Bravo, right after Real Housewives of Atlanta. [Related: Kim Zolciak-Biermann Was Sent 9 Videos of Daughter Ariana Breaking Into House]