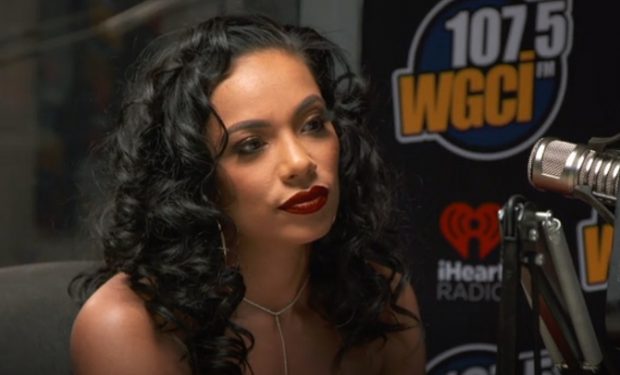 On the Black Ink Crew: Chicago episode “Potato with a Scarf On,” Love & Hip Hop star Erica Mena stops by Charmaine’s radio show on 107.5 WGCI. Charmaine introduces her as “the most beautiful reality star.” Charmaine says Erica Mena is known for her high-profile relationships (Bow Wow, Rich Dollaz) and her relationship problems but she’s now engaged to rapper/songwriter Safaree Samuels. Charmaine summarizes Erica Mena’s success: she started as “a nobody” working at a Kardashian boutique in Miami to starring on Love & Hip Hop to now having more than 4 million followers on social media.

[Erica Mena’s memoir Underneath It All]

When Charmaine brings up Erica’s last relationship (prior to Safaree), she noted that “it was very difficult for you.” Erica was arrested and her mugshot was all over the blogs. According to Charmaine, the cops were called to her place “over someone yelling and being slapped. Then they arrested her ex-boyfriend Cliff for breaking down her door and arrested Erica for having just a little weed in her apartment.” Erica spent 48 hours in jail. She says her time “definitely gave me the wake-up call that I needed. ‘You’re Erica Mena, you’re not supposed to be in this situation’.” Erica Mena is celebrating her survival with a new tattoo by Ryan Henry. Black Ink Crew: Chicago airs Wednesdays at 9 pm on VH1. [Watch It Again: Stream VH1 shows anytime — VH1 app is free]

Check out Erica Mena in Chris Brown’s “Yo, Excuse Me Miss” music video…