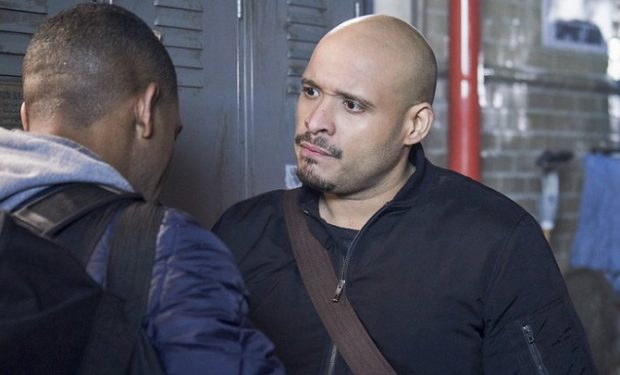 In the first part of a crossover with Chicago P.D., on the Chicago Fire episode “What I Saw,” Firehouse 51 responds to a fire in an apartment building. The manager says it’s on the first floor and tells Boden (Eamonn Walker) that they have a lockbox so they don’t have to bust down the doors. When Severide (Taylor Kinney) hears someone trapped in a unit, Casey (Jesse Spencer) goes to the lockbox for the key but the box is empty, the keys are gone. Only firefighters have access to lockboxes. Even building owners don’t have keys to the lockbox. Chicago P.D. detective Voight (Jason Beghe) believes a firefighter may be involved in a string of robberies being pulled off thanks to the access to the lockboxes.

[Watch Chicago Fire and P.D. whenever you want]

In an interview with actors Beghe and Walker, Beghe explains: “So we put Cruz (Joe Minoso) undercover against his will and against the good judgement of many people.” Walker adds, “including the commissioner” who’s played by Gary Cole. Cruz gets put in a fire station where the Chicago PD thinks the culprit works. Beghe promises “more nail-biting moments.” Walker says Beghe’s character “bullies us into doing it.” Beghe smiles, “I’m persuasive.” Walker hints that at the end of the crossover, Voight is dealt “a real dilemma.”