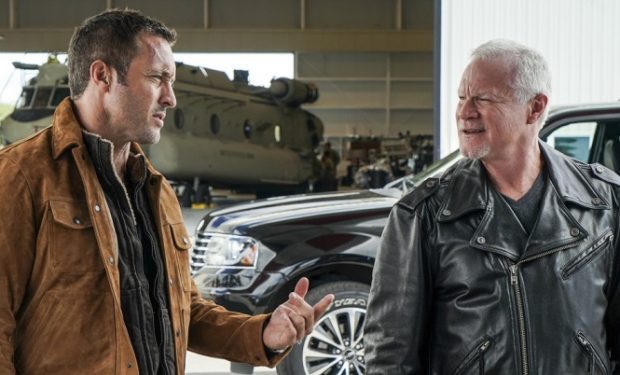 In the Hawaii Five-0 episode “Hala I Ke Ala O’i’ole Mai (Gone on The Road From Which There is no Returning),” Steve (Alex O’Loughlin) and Catherine (Michelle Borth) are still reeling from the murder of one of their ohana, Joe White (Terry O’Quinn). They ask Danny (Scott Caan) and Junior (Beulah Koale) for help in hunting down the killer.

They also ask two old friends, Harry Langford (Chris Vance) and Commander Wade Gutches, for help. When Wade pulls up at a U.S. Military Airbase in Montana on his motorcycle, Danny kids that he looks like the “AARP posterboy.” Catherine says “He might be retired by he’s still got game.”

Commande Wade Gutches is portrayed by actor David Keith. He’s known for his roles on Reckless (Pat McCandless), Lone Star (John Allen), The Class (Yonk Allen), High Incident (Corporal Jim Marsh), and in a variety of films including Daredevil (Jack Murdock), Firestarter (Andy McGee), An Officer and a Gentleman (Sid Worley, SEE LINK ABOVE), Take This Job and Shove It (Harry Meade), Brubaker (Larry Lee Bullen), and The Great Santini (Red Petus), among others. Hawaii Five-0 airs Fridays at 9 pm on CBS, right after MacGyver and right before Blue Bloods.