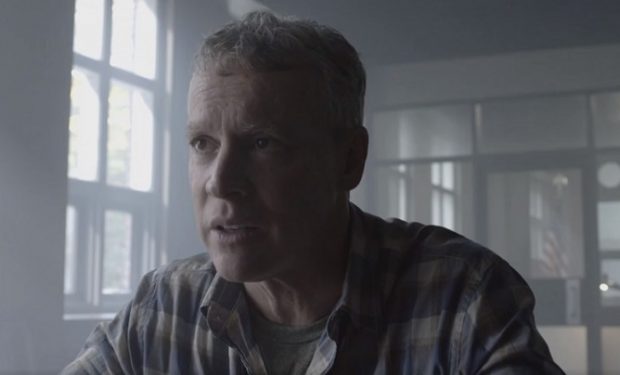 Tate Donovan in Love You to Death (Lifetime)

The Lifetime movie Love You to Death is about a young woman named Esme (Tony Award nominee Emily Skeggs) who discovers that her mother Camile (Oscar winner Marcia Gay Harden, Pollock) has been using Esme and her poor physical health to win everyone’s sympathy. While Esme grows suspicious of her mother and starts to realize that she’s been “a victim of Munchausen Syndrome by Proxy, forced to believe she was ill by her controlling, abusive mother,” Esme asks to see her estranged father. He tells Esme, “Your mom was sick, not you.”

[What is Munchausen Syndrome by Proxy?]

Unfortunately, that piece of information doesn’t stop Esme from having her boyfriend Scott stab her mother to death in the house. Love You to Death is inspired by the true story of Clauddine “Dee Dee” Blanchard and Gypsy Blanchard, who is currently serving 10 years in prison for the second degree murder of her mother.

Esme’s father is portrayed by actor Tate Donovan. He’s known for his roles on The Man in the High Castle (George Dixon), 24: Live Another Day (Mark Boudreau), Hostages (Brian Sanders), Deception (Edward Bowers), Damages (Tom Shayes), The O.C. (Jimmy Cooper), and Friends (Rachel/Jennifer Aniston’s crush Joshua Burgin), among others. Donovan is also recognized for his roles in two Affleck films — Manchester by the Sea with Casey Affleck (Hockey Coach) and Argo with Ben Affleck (Bob Anders), among others. “Love You to Death” premieres on Lifetime on Saturday, January 26 at 8 pm.