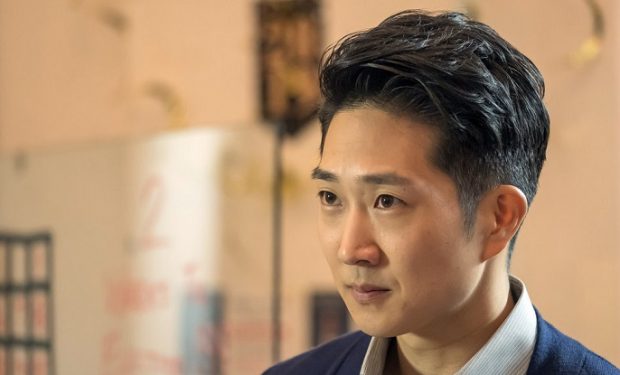 THIS IS US, Tim Jo as Jae-won Yoo (Ron Batzdorff/NBC)

In the This Is Us episode “The Last Seven Weeks,” while Kate (Chrissy Metz) and Toby (Chris Sullivan) get ready for the baby, and Kevin (Justin Hartley) meets someone from Zoe’s (Melanie Liburd) past, Randall’s (Sterling K. Brown) political campaign in Philadelphia comes to a close. He and his campaign manager, Jae-won Yoo, share a moment in the office.

[Watch Jo on The Neighbors]

Randall’s campaign manager Jae-won Yoo is portrayed by Tim Jo. The Texas native is known for his roles on the TV series Pitch (Eliot), The Neighbors (Reggie Jackson, SEE LINK ABOVE), Glory Days (Alex Change), and in the 2015 Al Pacino film Danny Collins (Tim), among others. This Is Us airs Tuesdays at 9 pm on NBC, right after Ellen’s Game of Games and right before New Amsterdam.

My other tv son @hellotimjo (Tim Jo) and my husband Simon Templeman pic.twitter.com/ZjoEz33K