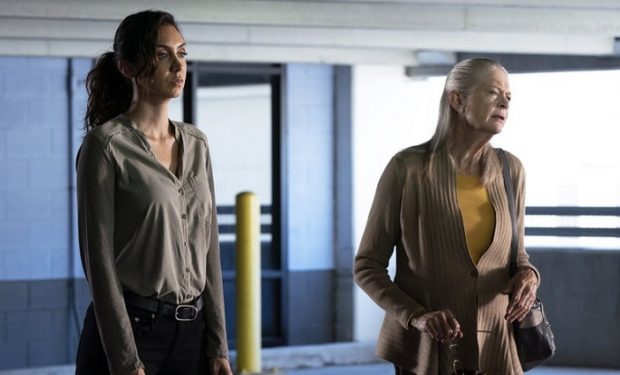 In The Blacklist episode “The Pawnbrokers,” Red is processed and sent to federal prison where he’s challenged by an old rival Baldomero (Jacinto Taras Riddick), who threatens to kill Red. Meanwhile, Samar (Mozhan Marnò) goes undercover to stop a black market organization that fronts massive amounts of cash to criminals. The organization is run out of a pawn shop, Quick Money Gun and Pawn in Cherry Hill, by a sweet looking older couple. The husband in the couple, Rod Uhlman, is portrayed by Emmy Award-winning actor Larry Bryggman (Dr. John Dixon on As the World Turns); his pawnbroker wife Delaine Uhlman is portrayed by two-time Emmy Award winner Dorothy Lyman.

[Cehck out Lyman as Reba’s mother on Reba]

Actress Dorothy Lyman is best known for her roles on Mama’s Family (Mama’s daughter-in-law Naomi Oates Harper) and the soap opera Days of Our Lives (Opal Gardner, for which she won two Daytime Emmy Awards), among others. The Blacklist airs Fridays at 9 pm on NBC, right after Blindspot and right before Dateline.