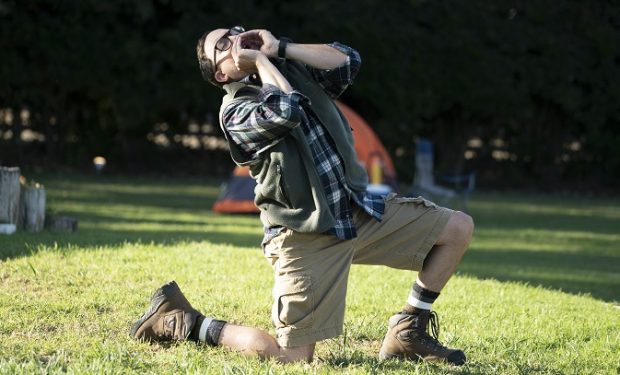 In the black-ish episode “Wilds of Valley Glen,” Dre (Anthony Anderson) must take his children Jack (Miles Brown) and Diane (Marsai Martin) on a mandatory camping trip for school (Valley Glen Prep). There they are greeted by an overly enthusiastic camper, Mr. Solomon. Dre hatches a plan for him and the kids to escape to a fancy hotel for some pampering.

[Check out Byrne in Big Little Lies with Reese Witherspoon]

Mr. Solomon on black-ish is portrayed by P.J. Byrne. He’s known for his roles on I’m Dying Up Here (Kenny Vessey), Big Little Lies (Principal Nippal, SEE LINK ABOVE), Vinyl (Scott Levitt), The Game (Irv), and in several films including The Wolf of Wall Street (Micky Koskoff aka Rugrat), Dinner for Schmucks (Davenport), Horrible Bosses (Kenny Sommerfeld), and Charlie Wilson’s War (Jim van Wagenen), among others. Byrne will appear next on the big screen as FOX News anchor Neil Cavuto in the Untitled Roger Ailes Project with John Lithgow as Ailes. black-ish airs Tuesdays at 9 pm on ABC, right after The Kids Are Alright and right before Splitting Up Together.

Byrne was also in Ramage with Dwayne The Rock Johnson…

Now sure it’s common for @PJ_Byrne to be looking up at something but when @TheRock is looking up you know it must be big 😂. @rampagethemovie is in theaters now & holds the answer to what these two handsome gents are staring at in awe! #Rampage #InTheaters @sevenbucksprod pic.twitter.com/dCHP7JzBcD