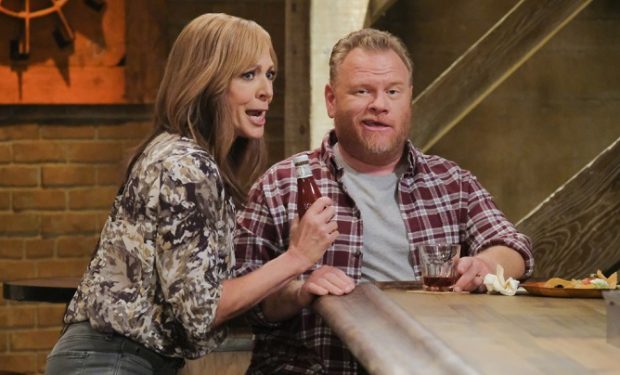 In the Mom episode “Hacky Sack and a Beautiful Experience”, Christy’s (Anna Faris) smoking causes problems when the ladies take a road trip. Meanwhile at home, Bonnie (Allison Janney) offers Adam (William Fichtner) unsolicited business advice at the bar. When Bonnie suggests having a karaoke night at the bar, Adam shoots it down as a bad idea — but Adam’s one and only patron at the bar, Mike, chimes in on the idea with Bonnie. Together they sing the Carly Simon/James Taylor duet “Mockingbird” and it’s hilarious. Video below.

[Check out Campbell as Andy in According to Jim]

Bar “Mockingbird” singer Mike is portrayed by actor Larry Joe Campbell. He’s known for his roles on The Orville (Steve Newton), American Vandal (Greg Kavanagh), Weeds (C.P. Jones), According to Jim (Andy), and The Trouble with Normal (Stansfield Schlick), among others. Mom airs Thursdays at 9 pm on CBS, right after Young Sheldon and right before the new sitcom FAM.