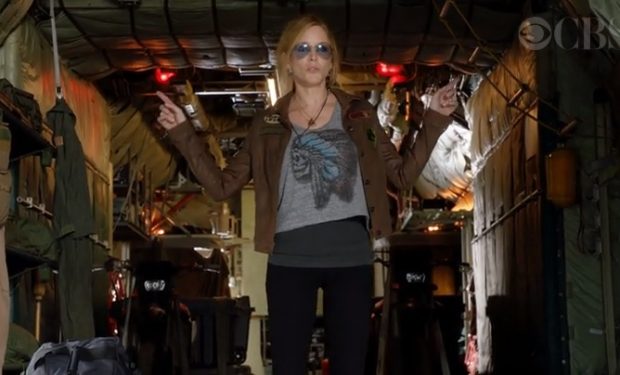 In the Hawaii Five-0 episode “Hala I Ke Ala O’i’ole Mai (Gone on The Road From Which There is No Returning),” Steve (Alex O’Loughlin) and Catherine (Michelle Borth) seek revenge for the murder of one of their ohana, Joe White (Terry O’Quinn). They ask Danny (Scott Caan) and Junior (Beulah Koale), and retired US Navy SEAL Commander Wade Gutches (David Keith, An Officer and a Gentleman), for help in tracking down the killer.

They all meet at a U.S. Military Airbase in Montana, where Lucia Bama tells Steve the military helicopter is ready to take off. When Gutches asks who is that, Steve explains that she’s the daughter of Frank Bama (Jimmy Buffett) and “she’s a real chip off the old block.”

Lucia is portrayed by Kristen Dalton. The California native is well known for her roles in the films Jack Reacher with Tom Cruise (Mindy) and The Departed opposite Jack Nicholson (his girlfriend Gwen). The actress also made a big impact in the TV series The Dead Zone (Dana Bright), and in the 2001 TV movie Surviving Gilligan’s Island: The Incredibly True Story of the Longest Three Hour Tour in History (as Tina Louise, who played Ginger), among others. Hawaii Five-0 airs Fridays at 9 pm on CBS, right after MacGyver and right before Blue Bloods.