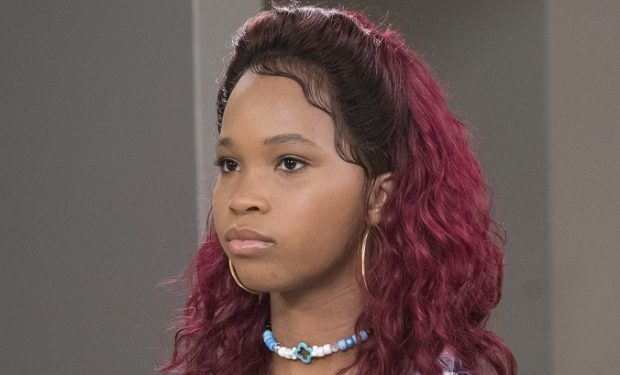 In the black-ish episode “Waltz in A Minor,” Dre’s (Anthony Anderson) teenage cousin Kyra needs a place to stay and the Johnsons decide to take her in. Not everyone is on the same page when it comes to helping Kyra adjust to suburban life. Meanwhile, the twins Jack (Miles Brown) and Diane (Marsai Martin) try to vet Kyra on social media to get information on her.

Kyra is portrayed by 15-year-old actress Quvenzhané Wallis. The Louisiana native made her acting debut as Hushpuppy in the highly praised 2013 film Beasts of the Southern Wild (SEE LINK ABOVE) for which she was nominated for the Academy Award for Best Actress. At 9, she was (and still is) the youngest ever nominee for the award.

Wallis is also known for her roles in the 2014 film Annie (as Annie) with Oscar winner Jamie Foxx (Ray) and in the multiple Oscar-winning film 12 Years a Slave (as Margaret Northup), among others. She’s currently working on the animated film Naya Legend of the Golden Dolphin (as Naya) with yes, another Oscar winner, Kate Winslet (The Reader). Black-ish airs Tuesdays at 9 pm on ABC, right after The Kids Are Alright and right before Splitting Up Together.