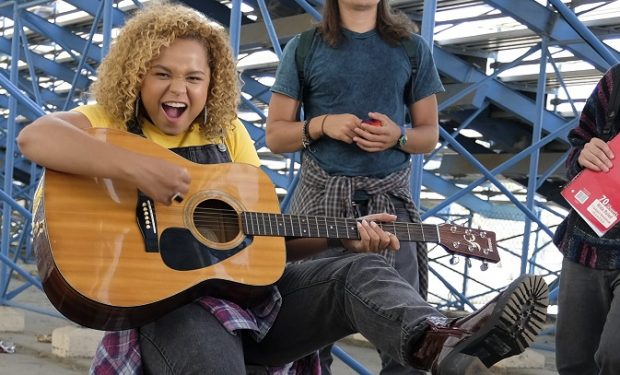 The Goldbergs spin-off Schooled on ABCstars Lainey (AJ Michalka) who returns to William Penn Academy as the new music teacher. It’s an awkward adjustment for Lainey as she figures out how to become an authority figure. There are several familiar faces at the high school including Principal Glascott (Tim Meadows) and Coach Mellor (Bryan Callen). Lainey finds her groove with one of her rock star students, Felicia, who just happens to be Principal Glascott’s precocious niece.

Principal Glascott’s niece Felicia is portrayed by actress Rachel Crow. Prior to becoming an actress, Crow launched her music career. In 2011, when Crow was just 13, she was on the first season of the American version of The X Factor, where she finished in fifth place.

As an actress, Crow, now 20, is known for her roles in the 2017 Netflix film Deidra & Laney Rob a Train (Laney Tanner) and on the Nickelodeon show Fred: The Show (Starr), among others. Fun fact: Crow is the voice of Carla in the 2014 animated film Rio 2. Schooled airs Wednesdays at 8:30 pm on ABC, right after The Goldbergs and right before Modern Family.

Rachel’s audition on The X Factor…