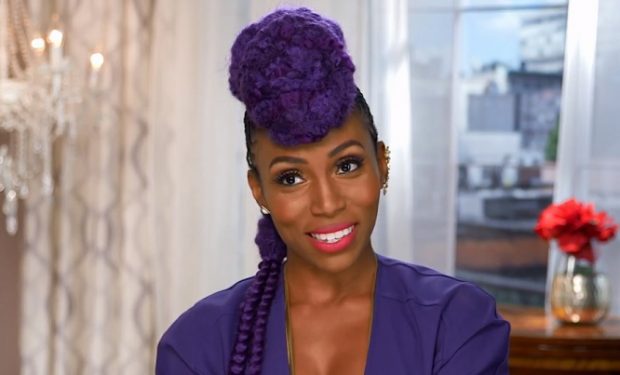 Nik West on Say Yes to the Dress (TLC)

On the Say Yes to the Dress episode “A Purple Unicorn,” purple-haired rock star Nik West, visits Kleinfeld Bridal. The former bass player for Prince is looking for a one-of-a-kind dress for her aerial (hot air balloon) wedding ceremony. She describes her look as “over the top and yet still classy.” The “Purple Unicorn” singer (video below) wants to look like a futuristic superhero on her wedding day so she chooses a dress/catsuit by Lakum, a Brooklyn based atelier in New York. This isn’t Nikki’s first time on TV. She’s also appeared on Glee and American Idol.

On May 11, 2019, Nik is marrying Nikoloz Kandelaki aka Niko. He was tour manager for Grammy-winner Macy Gray (whom Nik has played with too) when they met. Their first date was at Macy Gray’s birthday party.

Niko was born into the music industry: his family created the famous The Black Sea Jazz Festival which is held annually in Tbilisi, Georgia (the country not the state). To give you an idea of the star power the festival generates: In 2018, former Led Zeppelin lead singer Robert Plant opened the festival (performed for 90 minutes) and was followed by artists including Erykah Badu and Wyclef Jean. Say Yes to the Dress airs Saturdays at 8 pm on TLC.

Had a great time with #eltonjohn and my extended family! #Fatherinlaw #EltonJohn #NikWest https://t.co/BF0sNfrdjB pic.twitter.com/w2NYALRu2o