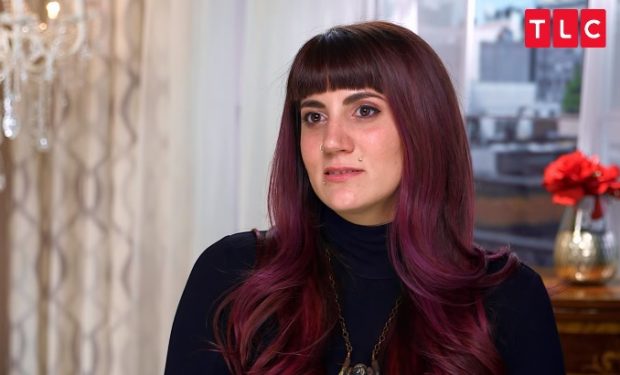 During the Say Yes to the Dress episode “Morticia Addams in a Good Way,” there are a couple of references to old TV character costumes. When one bride, who’s going for a fairy-like look, tries on a sparkly flowing big-sleeved dress, her friends and family say she looks like “I Dream of Jeanine.” The matriarch of the 1960s TV series The Addams Family, Morticia Addams, is also mentioned.

The TV show The Addams Family was based on the macabre cartoons of Charles “Chas” Addams in The New Yorker. The character of Morticia was purportedly based on Addams’ first wife Barbara Jean Day, who was described in The New York Times as “an inveterate hater of small children” who “balked at the prospect of adopting one,” and who later married Addams’ New Yorker colleague, Pulitzer Prize writer John Hersey (A Bell for Adano, Hiroshima).

In the cartoons, on the show, and in the films, Morticia Addams always wears a black hobble dress. It’s a long form-fitting gown with plunging neckline, long loose sleeves and a fringe of “octopus-like cloth tentacles at the lower hem. The tightness around her legs makes Morticia walk, or shuffle, in tiny steps — in other words, hobble. According to the Smithsonian, the hobble skirt was inspired by the first woman to fly in an airplane as a passenger. At a 1908 Wright Brothers demonstration in Le Mans, France, Mrs. Hart O. Berg flew in an airplane and tied a rope around her skirt at the ankles to keep it from blowing in the wind while soaring in the sky. The hobble skirt was a short-lived fashion trend that fizzled out at the beginning of World War I (1914).

On the 1960s TV show, Morticia was portrayed by Carolyn Jones. In the 1991 film, The Addams Family, Anjelica Houston played Morticia (SEE LINK ABOVE), and in the 1998 film Addams Family Reunion, Daryl Hannah wore the hobble dress. In the 2010 Broadway musical, both Bebe Neuwirth and Brooke Shields slipped into the role. Say Yes to the Dress airs Saturdays at 8 pm on TLC.