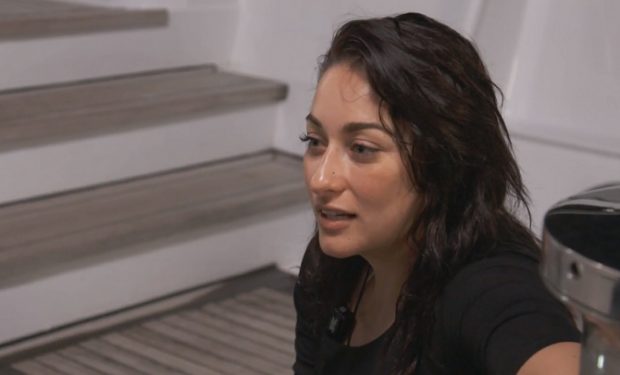 Laura on Below Deck (Bravo)

In the Below Deck Season 6 final episode “Au Revoir!”, while the primary guest aboard My Seanna continues to be difficult with everyone, chef Adrian Martin comes up with a unique idea for a centerpiece. When he shares his idea (the centerpiece is filled with living sea creatures including “ejaculating sea slugs”), chief stew Kate Chastain nixes the idea. Meanwhile steward Laura Betancourt confides in deckhand Ashton Pienaar about Adrian. She says Adrian has been “really pissing me off lately” and has been saying “really inappropriate things to me all the time.”

[Watch any Below Deck episode whenever you want]

When Ashton asks for an example, Laura says when she was in the kitchen making a charcuterie board she asked, “Where’s the meat?” and Adrian walked over to her and replied “The meat is right here,” quickly pointing to his crotch.

“It gets vulgar,” Laura says. “And it’s always when no one else is around.” (Although the cameras did catch the conversation Laura described.) When Ashton suggests that she tell Adrian to stop, Laura says, “I don’t know…” Ashton tells the cameras, “I care about Laura, and I don’t want someone making her feel like s–t, but she’s a big girl. If she needs help from me, she’ll ask for it.” Below Deck airs Tuesdays at 9 pm on Bravo.