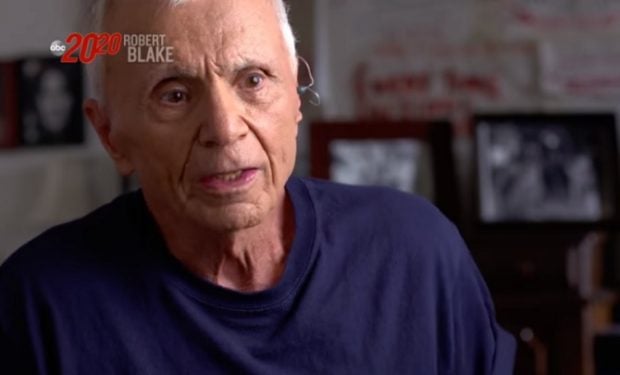 Robert Blake, the 85-year-old Hollywood actor best known for his roles in the film In Cold Blood and on the TV shows Baretta, recently refused an interview with ABC’s 20/20. But he did invite the crew to his apartment to interview his friend, Karen Sperling, collaborator on Robert Blake’s memoir. Blake watches Sperling as she speaks about his childhood. Sperling says Blake’s parents wanted to abort him because he was the result of an affair between his mother and his uncle.

That’s when Blake interrupts the interview and sits down in front of the camera and says, “This is the bottom-line truth.” Before he proceeds, a makeup artist applies makeup to his face and folds the wire of his earplug which is sticking out of his ear. He responds by saying, “I thought that was a part of my brain. There’s about three-quarters of my brain that I’d be happy to get rid of.”

Blake reflects on his past including his relationship with his late wife Bonny Lee Bakley, who was murdered in 2001. Blake had met Bakley two years prior in 1999. In June 2000, Bakley had a child (a daughter later named Rose Lenore Sophia Blake) and five months later, after a DNA test proved Rosie was his daughter, Blake and Bakley wed. She was his second wife; he was her tenth husband.

[After the acquittal, Blake wrote What I Did For Love]

On the night of Bakley’s murder, Blake took her out for dinner in Studio City. While sitting in Blake’s parked car around the corner from the restaurant, Bakley was fatally shot in the head. In 2002, Blake was arrested and charged with his wife’s murder. However, there was no forensic evidence implicating Blake in the murder.

In 2005, Blake was found not guilty of Bakley’s murder and was acquitted. Later that year, in 2005, Blake was found liable for the wrongful death of his wife and was initially ordered to pay $30 million to her four children — but the assessment was later cut in half to $15 million. In 2017, Blake married longtime friend Pamela Hudak, who testified on his behalf at the trial. She was his third wife. In December 2018, Blake filed for divorce.

Note: Blake’s daughter Rosie is being raised by his adult child Delinah Blake from his first marriage. In 2003, while in jail, Blake told Barbara Walters, with Rosie, “I get to play grandpa.”20/20 airs Friday at 9 pm on ABC.