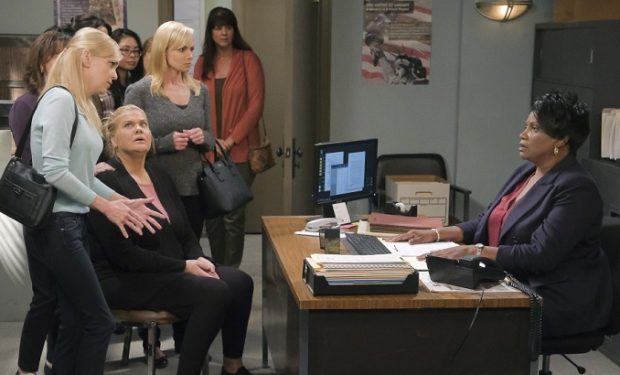 In the Mom episode “Foot Powder and Five Feet of Vodka”, Christy’s (Anna Faris) search for a Secret Santa gift leads her to discover Adam (William Fichtner) has been hiding something from Bonnie (Allison Janney). Meanwhile, when Tammy (Kristen Johnston) meets her parole officer Ms. Ferguson, she’s told that she needs to get a job or she’ll be sent back to prison. “That’s a kick in the lady pants,” says Tammy.

[Check out Horsford in Friday]

Tammy’s parole officer Ms. Ferguson on Mom is portrayed by actress Anna Maria Horsford. She’s known for her roles on The Bold and the Beautiful (Vivienne Avant), Reed Between the Lines (Ms. Helen), The Shield (ADA Beth Encardi), The Wayans Bros. (Dee), and Amen (Thelma Frye), among others. Horsford is also recognized for her roles in the films Minority Report (Casey), One Fine Day (Evelyn), and Friday (Mrs. Jones, SEE LINK ABOVE). Mom airs Thursdays at 9 pm on CBS, right before Murphy Brown.

Happy Birthday @willsmith 🎈This was one of my favorite guest appearances 😊 pic.twitter.com/sYtusK4ISl