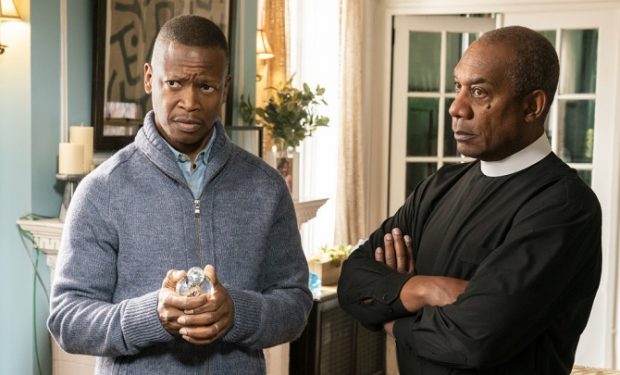 In the God Friended Me episode “Coney Island Cyclone,” the God Account sends Miles (Brandon Micheal Hall) the name of one of Reverend Arthur Finer’s (Joe Morton) parishioners, a single father who recently lost his wife, and the similarities to their own loss reopens old wounds. The single father, Aaron, is portrayed by Lawrence Gilliard, Jr.

Gilliard is known for his roles on The Deuce (Chris Alston), Graceland (Agent Sean Logan), The Walking Dead (Bob Stookey), Army Wives (Marcus Williams), The Wire (D’Angelo Barksdale), and George (Lathan Basmore), among others. Gilliard is also recognized for his roles in a variety of films including Martin Scorsese’s Gangs of New York (Jimmy Spoils) and Adam Sandler’s The Waterboy (Derek Wallace, see photo below). Gilliard will appear next on the big screen in the post-apocalyptic thriller St. Sebastian directed by Danny DeVito. God Friended Me airs Sundays at 8 pm on CBS, right before NCIS: Los Angeles.

Back in the day – Last night after the big EMMY win! So happy for my pal Henry Winkler!!! #waterboy #barry #thedeuce #hbo #winning #2018 pic.twitter.com/pN0w2eBzxr