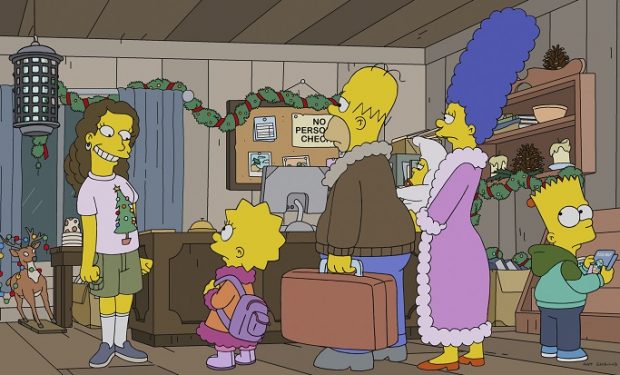 In The Simpsons episode “’Tis the 30th Season,” Marge is determined to fix Christmas after a failed Black Friday shopping spree. But before she can yell “Bart!”, Homer and the kids surprise her with a vacation to a Florida resort, which turns out to be a knock-off Disney World. They are greeted by the manager, Jeanie, who’s voiced by Jane Lynch. This is Lynch’s second gig on The Simpsons. She was the voice of Roz Davis in the 2011 episode “Replaceable You” (see link below).

[Watch The Simpsons episode “Replaceable You”]

As an actress, Jane Lynch is best known for her on-camera roles on The Marvelous Mrs. Maisel (Sophie Lennon), The Good Fight (Madeline Starkey), Criminal Minds (Diana Reid), Angel from Hell (angel Amy), Glee (Sue Sylvester, for which she won a Golden Globe award), and Two and a Half Men (Charlie’s therapist Dr. Linda Freeman), among others. Lynch is also well recognized for her roles in a variety of films including The 40-Year-Old Virgin (Paula) and Wreck-It Ralph (sexy warrior with tragic backstory Calhoun), among others. The Simpsons airs Sundays at 8 pm on FOX, right before Bob’s Burgers.