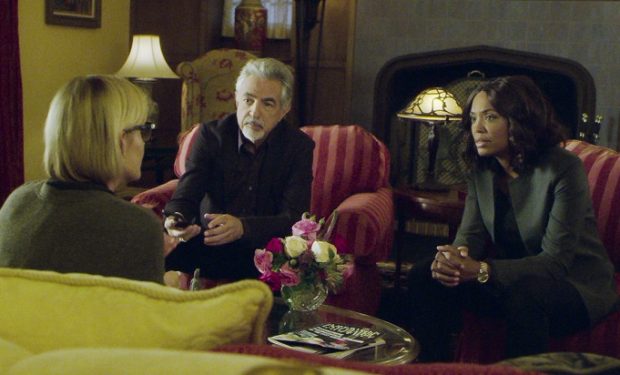 In the Criminal Minds episode “Flesh and Blood,” Prentiss (Paget Brewster) faces her past when the BAU is sent to investigate the murders of prominent businessmen, all of whom are missing their hearts. The team believes the unSub is “acting on sadistic impulses driven by the need to punish or seek retribution for some profound personal grievance.” The investigation leads Rossi (Joe Mantegna) and Lewis (Aisha Taylor) to the home of Dr. Elizabeth Rhodes who is portrayed by Penelope Ann Miller.

The Dr. Rhodes actress Penelope Ann Miller is known for her roles on American Crime (Eve Carlin), Mistresses (Elizabeth Grey), Men of a Certain Age (Sonia Tranelli), The Closer (Erica Hewitt), and in the films The Birth of a Nation (Elizabeth Turner), The Artist (Doris), Carlito’s Way (Gail, SEE LINK ABOVE), Chaplin (Edna Purviance), Kindergarten Cop (Joyce), Biloxi Blues (Daisy), and The Freshman (Tina Sabatini), among others. Fun fact: Miller was nominated for a Tony Award as Best Actress in the 1989 revival of “Our Town.” Criminal Minds airs Wednesdays at 10 pm on CBS, right after SEAL Team.