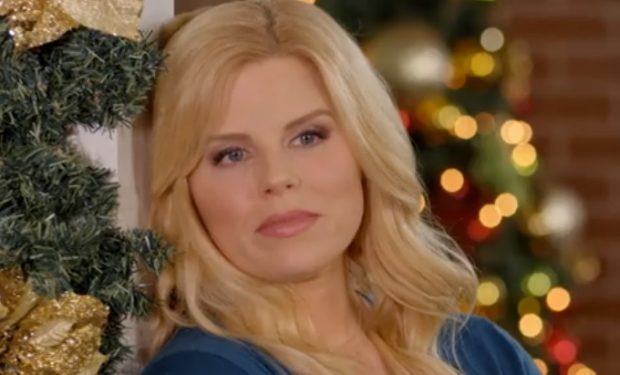 In the Lifetime Christmas movie Santa’s Boots, MBA businesswoman Holly (Tony Award nominated Megan Hilty, Smash), comes home for the holidays, as usual. But when she arrives, the drop dead gorgeous blonde is surprised to discover that her family’s department store is on the brink of foreclosure. To help promote the store during the holidays, Holly fills in as Santa’s Helper. While in her elfin costume, she falls for Santa — aka Nick (Noah Mills, boyfriend Robbie on 2 Broke Girls). And the feeling is mutual. Holly is encouraged by everyone including Grammy to go for it.

[Squibb was nominated for an Oscar for her role in Nebraska]

Holly’s Grammy on Santa’s Boots is portrayed by June Squibb. The 89-year-young actress is known for her roles on Shameless (Etta), Ghost Whisperer (Melinda’s grandma), Judging Amy (Louise Flowers), and in a variety of films including Nebraska (Kate, Will Forte’s mother), About Schmidt (Helen, Jack Nicholson’s wife), Meet Joe Black (Helen), and Scent of a Woman (Mrs. Hunsaker), among others. Fun fact: Squibb made her movie debut at the age of 61 in Woody Allen’s 1990 film Alice with Mia Farrow (as Hilda). At the age of 31, Squibb made her Broadway debut in the original production of Gypsy starring Ethel Merman, taking over the role of stripper Electra in 1960. Santa’s Boots premieres on Lifetime on Saturday, December 8 at 8 pm.

i feel pretty passionate everyone shd know june squibb played the stripper electra in the original GYPSY on bway pic.twitter.com/pTM5uDUHvJ