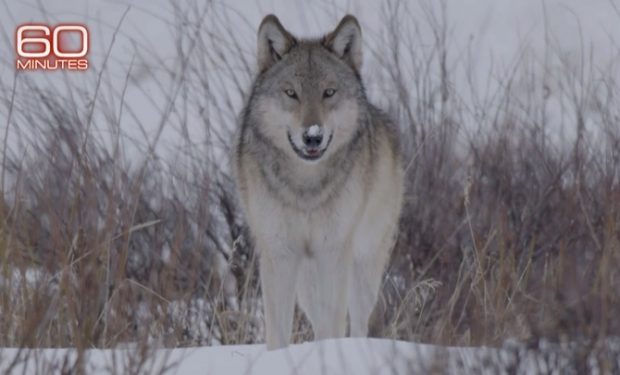 The U.S. Park Service has carefully re-introduced the wolf to Yellowstone National Park. According to a 60 Minutes report, in just 23 years the population of wolf in the park has grown to 100 in 10 packs which is “enough to attract wolf tourists whose visits to the park pump $35 million into the local economy.” You read that right, wolf tourists. Winter is peak season for viewing wolves at Yellowstone.

In the clip below, 60 Minutes correspondent Bill Whitaker interviews the Yellowstone National Park‘s wolf expert Doug Smith, who explains how the fierce and territorial wolves are monitored. In a helicopter they shoot wolves with a tranquilizer and in five minutes they “process the wolves, take blood, and attach a radio collar.” And then the wolves are followed “for life, hopefully.” Smith explains, “And their look is uncontrollable. That looks says ‘I ain’t gonna conform to your rules and I’ll die before I do.’” 60 Minutes airs on Sunday, December 23 at 7:30 pm on CBS.