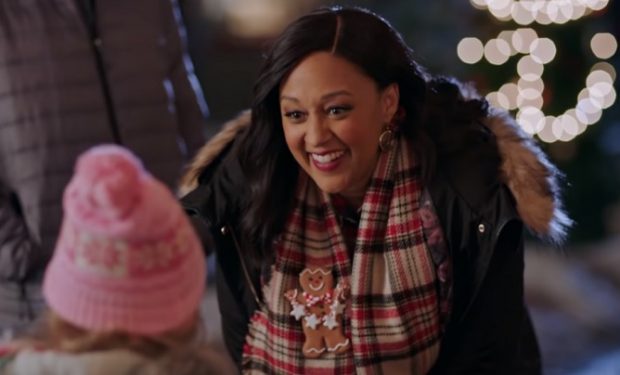 Known for putting everyone in the spirit of the season, Lifetime has done it again with their latest holiday movie My Christmas Inn. The story follows Jen Taylor (Tia Mowry-Hardrict), who on the eve of a big promotion at a San Francisco ad agency inherits a cozy Alaskan Inn from her aunt. The only catch is Jen must show up in person to claim it. This is where she meets handsome attorney Steve Anderson (Rob Mayes) and unexpectedly discovers a spark of love. When she meets Inn regulars Ruth and Henry, Jen is reminded just how fulfilling a loving relationship can be. Is this small town lifestyle what’s been missing all along? And could Steve actually be the Mr. Right she’s been longing for?

[Melanie Haynes in Adam Ruins Everything]

The lovey-dovey Ruth is portrayed by actress Melanie Haynes. The role is just one of many for Melanie right now. In December, she hits theaters voicing the Logic Teacher alongside Nicolas Cage, Hailee Steinfeld, Liev Schreiber, John Mulaney, Mahershala Ali and Lily Tomlin in the new Marvel Universe Sony animated feature film Spider-Man: Into the Spider-Verse.

Then in early 2019, Melanie appears in the third season of HBO’s anthology crime drama series True Detective, starring Mahershala Ali, Carmen Ejogo and Stephen Dorff. Her previous credits include the celebrated indie films Antiquities, Chasing the Sun, A Country Called Home, Heartland and The Last Mark; and recently as a Southern Chef opposite Adam Conover in TruTV’s Adam Ruins Everything (SEE LINK ABOVE). Her TV credits also include The Middle, Salem, A Face to Kill For, The Con, Arrest & Trial and The Daily Apple. Fun fact: A Texas native, Melanie danced for several years with Patsy Swayze’s Houston Jazz Ballet Company.