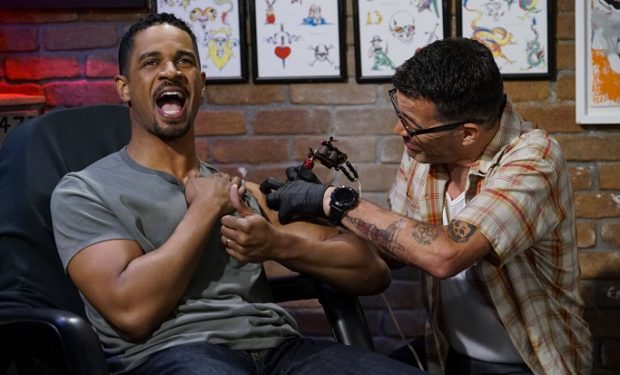 In the Happy Together episode “Bland Gestures”, Cooper (Felix Mallard) wants to impress a popular singer so he turns to married couple Jake (Damon Wayans, Jr.) and Claire (Amber Stevens West) for advice. When Jake and Claire suggest a big romantic gesture, they realize they should start making grand gestures in their own relationship. Claire’s gesture involves NBA basketball star Ben Simmons of the Philadelphia 76ers. Jake’s gesture involves a visit to a tattoo parlor where artist S10CIL works on Jake’s arm.

[Check out Steve-O on Jackass]

S10CIL is portrayed by Steve-O. Born Stephen Gilchrist Glover, the English-born actor, stunt performer, stand-up comedian and professionally trained clown is known for his days on the MTV stunt/prank TV series Jackass. He’s also known for having “dumb tattoos” including “Your Name” written on his butt and “yeah dude, I rock!’ on his back. Happy Together airs Mondays at 8:30 pm on CBS, right after The Neighborhood and right before Magnum, P.I.

Back to my roots! Getting carted around by @luxalot after my surgery to remove the plate & screws that were in my ankle for the last two years…