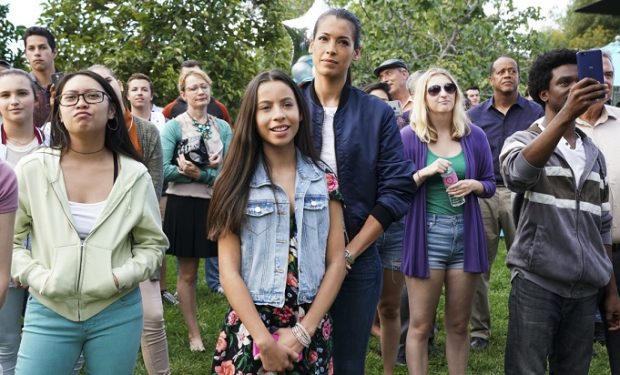 On the S.W.A.T. episode “The Tiffany Experience,” the team tries to track down a stalker obsessed with Tiffany, a social media star. When the dangerous stalker comes armed to one of Tiffany’s fan events, Jessica Cortez (Stephanie Sigman) gets caught in the crossfire. Tiffany is portrayed by child star Ronni Hawk (who IRL has close to 1 million social media followers). Fun fact: Tiffany’s boyfriend Tristan is played by real-life social influencer Zach Evans.

[Check out Hawk in Stuck in the Middle]

Ronni Hawk (Tiffany) is a 19-year-old model/actress who is best known for her roles on the Disney family comedy TV series Stuck in the Middle (Rachel Diaz, SEE LINK ABOVE), and on Netflix’s comedy On My Block (Olivia), the coming-of-age series which is the baby Lauren Iungerich, creator of MTV’s Awkward. S.W.A.T. airs Thursdays at 10 pm on CBS, right after Murphy Brown.