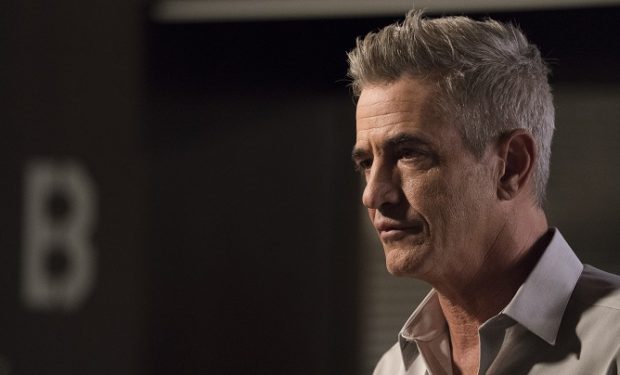 On the Station 19 episode “Last Day On Earth”, while Captain Sullivan (Boris Kodjoe) tries to bond with his crew, Ryan (Alberto Frezza) decides to talk it out with his father Greg Tanner. But right after making the decision, Ryan is surprised when Greg shows up at Station 19. With a bruised face, Greg tells Ryan this is their last chance “before I go away.”

Ryan’s Dad Greg Tanner is portrayed by Dermot Mulroney. He’s known for his roles on New Girl (Russell), Shameless (Sean Pierce), American Horror Story (Bob Thompson), Mozart in the Jungle (Andrew Walsh), Enlightened (Jeff Flender), and in the films Jobs (Mike Markkula), J. Edgar (Col. Schwarzkopf), About Schmidt (Randall), Young Guns (Dirty Steve Stephens), and two films with Julia Roberts — My Best Friend’s Wedding (SEE LINK/IMAGE ABOVE) and August: Osage County, among many others. Mulroney and Roberts are currently starring in Amazon’s new drama/thriller Homecoming. Station 19 airs Thursdays at 9 pm on ABC, right after Grey’s Anatomy and right before How To Get Away with Murder.