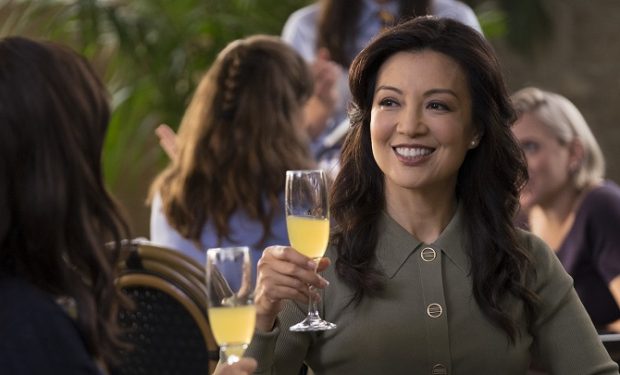 In the Fresh off the Boat episode “Mo’ Chinese Mo’ Problems”, Jessica (Constance Wu) and Louis (Randall Park) have been waiting for this moment — a Chinese family has moved into the neighborhood. They bond immediately. While Louis introduces the husband/father Julie (Reggie Lee, Sgt. Wu on Grimm) to Marvin, Jessica gets the wife/mother Elaine involved in the HOA. Together they work to ban mothers in the neighborhood from wearing low-rise jeans.

[Check out Wen on Two and a Half Men]

New neighbor Elaine on Fresh off the Boat is portrayed by Ming-Na Wen. She’s known for her roles on Agents of S.H.I.E.L.D. (Melinda May), Eureka (Senator Michaela Wen), SGU Stargate Universe (Camile Wray), Two and a Half Men (Judge Linda Harris, SEE LINK ABOVE), ER (Jing-Mei Chen), and The Single Guy (Trudy), among others. Fresh of the Boat airs Fridays at 8 pm on ABC, right before Speechless.