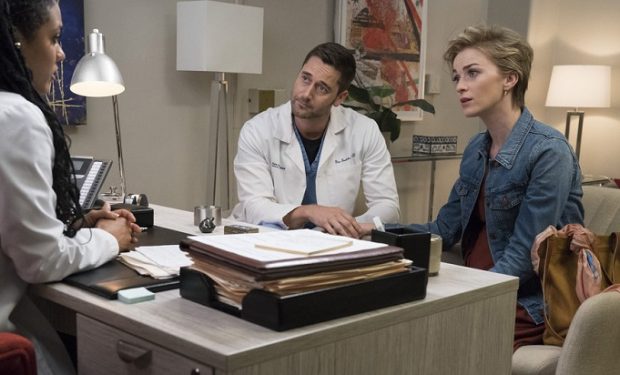 In the New Amsterdam episode “Domino Effect,”a big domino transplant procedure is on the line, and medical director Dr. Max Goodwin (Ryan Eggold, The Blacklist) must decide if he can be present in the hospital while also dealing with his illness (cancer). He and his pregnant wife Georgia Goodwin meet with oncologist Dr. Sharpe (Freema Agyeman) to discuss Max’s immediate next steps and his odds of beating the cancer.

Max’s pregnant wife Georgia Goodwin is portrayed by Lisa O’Hare. And O’Hare is one seriously talented woman. The English stage actress is known for her roles as Eliza Doolittle in My Fair Lady and Mary Poppins in Mary Poppins on the West End and UK stage. The trained ballerina (Royal Ballet School) also starred in the Broadway musical A Gentleman’s Guide to Love and Murder as Sibella Hallward (see photo below). New Amsterdam airs Tuesdays at 10 pm on NBC, right after This Is Us.