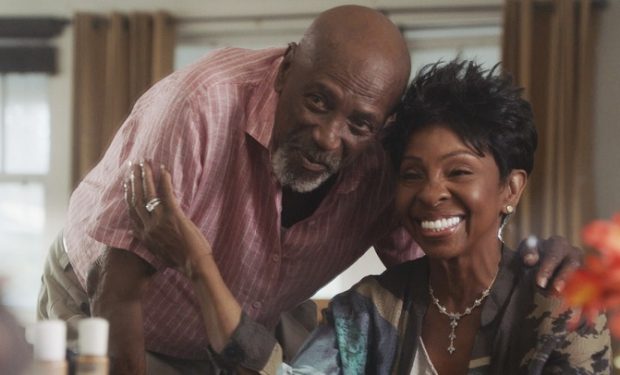 In the Hawaii Five-0 episode, “Lele pu na manu like (translated Birds of a Feather),” it’s Thanksgiving Day. Lou Grover’s (Chi McBride) parents and his brother Percy Jr. (Clifton Powell, Ray) are visiting for the holiday which turns sour due to sibling rivalry. The rivalry comes to an all-time high when the two men are preparing dinner in the kitchen. When Lou asks Percy what is it that he’s making, Percy says it’s quinoa “you fat dummy.” Lou calls him a “pretentious ass” before a hilarious food fight breaks out. Grover’s mother, Ella (Gladys Knight!) breaks it up. The father, Percy Sr., is portrayed by 82-year-old veteran actor Louis Gossett Jr.

Louis Gossett Jr. is known for his roles in the Iron Eagle films (Col. Chappy Sinclair), An Officer and a Gentleman with Richard Gere and Debra Winger (Sgt. Emil Foley, for which he won an Oscar for Best Supporting Actor), A Raisin in the Sun (George Murchison, SEE LINK ABOVE), and in the historic TV mini-series Roots (as Fiddler, for which he won a Primetime Emmy Award), among many others. He also won a Golden Globe for The Josephine Baker Story. Hawaii Five-0 airs Fridays at 9 pm on CBS, right after MacGyver and right before Blue Bloods.

Gossett giving it to Gere in An Officer and a Gentleman…

Gossett and Richard Pryor guest starred on The Partridge Family together too!