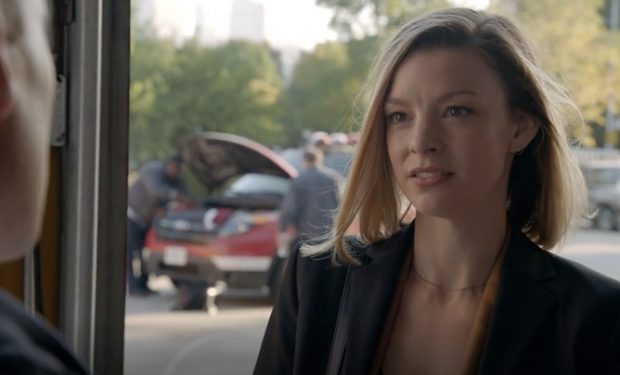 In the Chicago Fire episode “The Solution to Everything,” Firehouse 51 is called in to battle a dangerous structure fire that places everyone in peril. While Severide (Taylor Kinney) makes a big personal realization, Casey (Jesse Spencer) is surprised to see investigative reporter Naomi Graham at the firehouse again. While he seems delighted to see her at first, Naomi is all business. She tells Casey that the thing with Grand Brook Trailers isn’t over and then plays him a threatening voice mail she received about another fire at another trailer park, this time in Indianapolis.

[Check out Villanova in the comedy Wedgerino]

Investigative reporter Naomi is portrayed by Kate Villanova. The role of Naomi is Villanova’s big break. Prior to Chicago Fire, she was in two independent films by Chicago filmmaker Aaron Wertheimer – Skippers (2018) and Wedgerino (2015, SEE LINK ABOVE). Fun fact: Villanova is a newlywed — see cute couple photo below. Chicago Fire airs Wednesdays at 9 pm on NBC, right after Chicago Med and right before Chicago P.D.