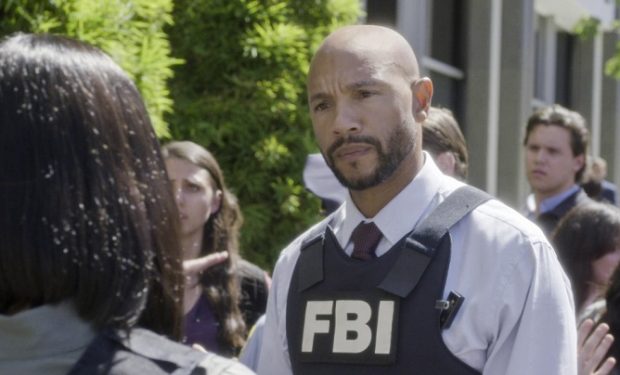 In the Criminal Minds episode “Twenty Seven,” BAU must stop a group of vigilantes who are attacking people every 27 minutes in the nation’s capital. They abduct, attack and then release a wealthy woman in a seedy neighborhood. They do the same thing to a working class man and release him in an upscale neighborhood. BAU deduces that the group is making a statement about economic inequality. Agent Emily Prentiss (Page Brewster) works with Unit Chief Andrew Mendoza to lead the effort to identify the Unsubs before it’s too late.

[Check out Bishop as David Justice in Moneyball]

Supervisory Special Agent (SSA) Andrew Mendoza is portrayed by Stephen Bishop. He’s known for his roles on Bravo’s Imposters (Patrick), Being Mary Jane (David), and in the 2011 Brad Pitt movie Moneyball (as MLB baseball player David Justice, SEE LINK ABOVE), among others. Bishop was a baseball player in real life: he played at the University of California, Riverside before playing in the Pioneer League for a few years in the mid 1990s. Criminal Minds airs Wednesdays at 10 pm on CBS.

Great to finally get a chance to work with my bro @adamrodriguez.. Only took us about 10-11 years 😂😂✊🏽💯#CriminalMinds