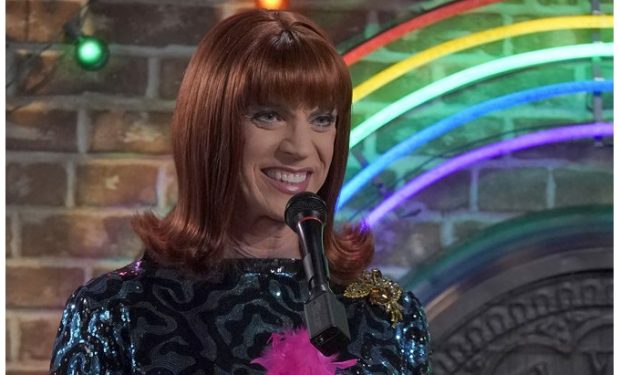 In the Will & Grace episode “Grace’s Secret,” when Grace (Debra Messing) and her father Martin (guest star Robert Klein) go on a road trip together, a secret from Grace’s past is revealed and changes their relationship forever. Meanwhile, at Jack’s (Sean Hayes) engagement party at a gay bar, Will (Eric McCormack) and Karen (Megan Mullally) have a lip sync showdown to determine who will be Jack’s best man at the wedding. The contest is run by legendary drag queen Miss Coco Peru, who’s known for her “trademark copper-toned flip hairdo.”

[Check out Coco in Girl Will Be Girls]

Miss Coco Peru is the persona of Clinton Leupp. Leupp introduced Miss Coco Peru to the world in the 1995 film To Wong Foo Thanks for Everything, Julie Newmar. Coco has starred in dozens of “one-woman shows” over the past 20 years and has appeared in several films including Trick and Girls Will Be Girls (SEE LINK ABOVE), among others. Will & Grace airs Thursdays at 9 pm on NBC, right after The Good Place and right before I Feel Bad.