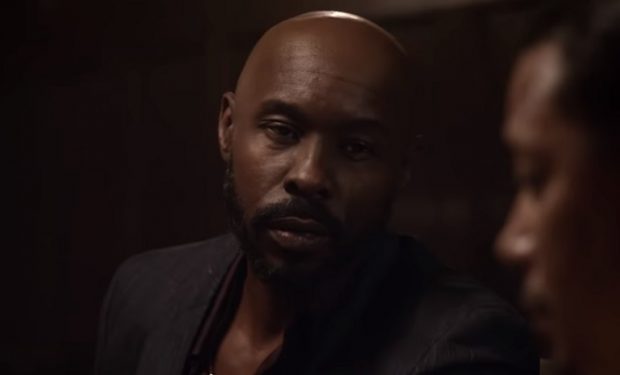 On the Empire episode “What Is Done,” Cookie (Taraji P. Henson) and Lucious (Terrence Howard) make a bet to see who can find a new artist first. It sounds like fun and games but if they don’t make more money, they’re going to lose everything including their brand new business. Lucious bets on the chance to meet an up-and-coming rapper at a high-stakes ($500,000) poker game. There he meets Damon Cross, a newcomer to the game, who tells Lucious, “I hope you’re ready because I’m a game changer.”

[Check out Wood Harris in Remember the Titans with Denzel Washington]

The smooth and sexy Damon Cross is a dangerous money launderer portrayed by Wood Harris. Born Sherwin David Harris, he’s known for his roles on The Breaks (Barry Fouray), The New Edition Story (Brooke Payne), Justified (Jay), The Wire (Avon Barksdale), and in the films Ant-Man (Gale), Dredd (Kay), Remember the Titans (Julius Campbell, SEE LINK ABOVE), and Above the Rim with the late Tupac (see photo below), among others. Fun fact: Harris is the brother of fellow actor Steve Wood (Eugene on The Practice). Empire airs Wednesdays at 8 pm on FOX, right before Star.

Tupac Shakur and Wood Harris in Above the Rim (1994) pic.twitter.com/sIa0Exdxfl