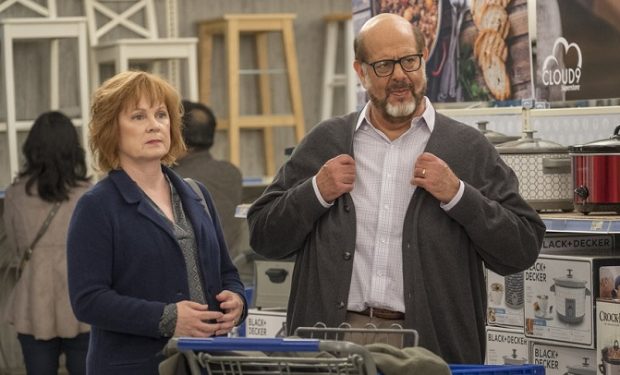 In the Superstore episode “New Initiative,” a new Cloud 9 corporate initiative forces employees to be friendlier to customers. In the store, Amy (America Ferrera) ends up getting to know Jonah’s (Ben Feldman) parents Richard and Marilyn Simms. While pushing a cart around the store and trying out mattresses together, Amy discovers that Ben hasn’t been totally truthful with his parents. Ben’s mother is portrayed by Meagen Fay. His father is portrayed by actor Fred Melamed.

[Check out Melamed in Lake Bell’s In a World…]

The familiar looking Melamed, a Yale School of Drama graduate with a booming voice, is known for his roles in the films In a World… (Sam, SEE LINK ABOVE for this brilliant movie written by Lake Bell), the Coen Brothers’ A Serious Man (Sy), on Netflix’s Lady Dynamite (Bruce Ben-Bacharach) and Curb Your Enthusiasm (Dr. Thurgood), among many others. Melamed is also recognized for his roles in several Woody Allen films including Radio Days and Hannah and Her Sisters. Superstore airs Thursdays at 8 pm on NBC, right before The Good Place.

Fred Melamed on the roles of his career, including the Coens’ A Serious Man & Hail, Caesar! https://t.co/fYpruG5yLe pic.twitter.com/4sE942UoUd