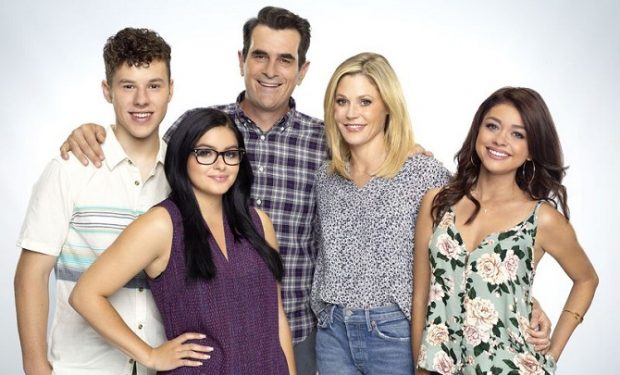 In the Modern Family episode “Did the Chicken Cross the Road?”, Cam (Eric Stonestreet) decides to get a chicken after he forgets the words to his favorite country song. You read that right. He blames city slicker Mitch (Jesse Tyler Ferguson) and wants to reconnect with his country boy roots. Meanwhile, Alex (Ariel Winter) is excited to be considered for a prestigious government job — but her chances are jeopardized when a government official named Florence interviews her overcompensating family.

Government interviewer Florence is portrayed by actress Rosa Blasi. She’s known for her roles on Nickelodeon’s The Thundermans (Barb Thunderman), Make It or Break It (Ronnie Cruz), and Strong Medicine (Dr. Luisa Delgao), among others. Fun fact: The former Miss Chicago 1994 wrote the memoir Jock Itch: Misadventures of a Retired Jersey Chaser (SEE LINK ABOVE) about the ten years she spent dating professional athletes including her now ex-husband NFL football player Jim Finn of the New York Giants. Modern Family airs Wednesdays at 9 pm on ABC, right after American Housewife and right before Single Parents.

Digging my hair today! And by “my hair” I mean the person I bought it from and then had it installed. #setsecrets @janetmoorehair hair @romicortier color 💁🏽‍♀️