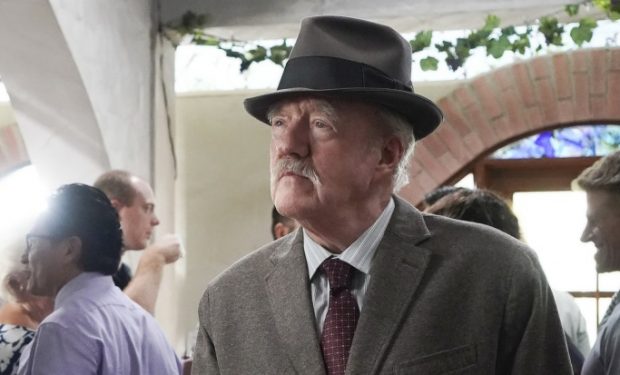 Hawaii Five-0 is celebrating its 200th episode with a cold case from the 1940s. In “Pua a’e la ka uwahi o ka moe” (translated “The Smoke Seen in the Dream Now Rises”), McGarrett (Alex O’Loughlin) meets retired Honolulu P.D. Detective Milton Cooper. He was best friends with McGarrett’s grandfather who wanted to become a cop but was killed during the Battle of Pearl Harbor before he had the chance. When McGarrett meets Milton, the old man gives McGarrett his grandfather’s briefcase. Inside are clues to solve a cold case from the 1940s, one that Milton and McGarrett’s grandfather tried to solve along with the legendary Honolulu detective Chang Apana.

[Herd played McCord, CIA officer-turned-Watergate-burglar in All the President’s Men]

Retired Detective Milton Cooper is portrayed by Richard Herd. The 86-year-old actor is known for his TV roles on Star Trek: Voyager (Admiral Owen Paris), Seinfeld (George’s boss at the Yankees, Mr. Wilhelm), and T.J. Hooker (Captain Sheridan), among others. Herd is also well recognized for his roles in a variety of films including Jordan Peele’s Get Out (Roman Armitage), Private Benjamin (General Foley), The China Syndrome (Evan McCormack), and All the President’s Men (James W. McCord, Jr., SEE LINK ABOVE), among many others. Hawaii Five-0 airs Fridays at 9 pm on CBS, right after MacGyver and right before Blue Bloods.

Actor Richard Herd will be on campus Wednesday as part of the AUM Lecture Series! This event is open to the public. https://t.co/UTjEQjiqtk pic.twitter.com/Utjicsdk4S