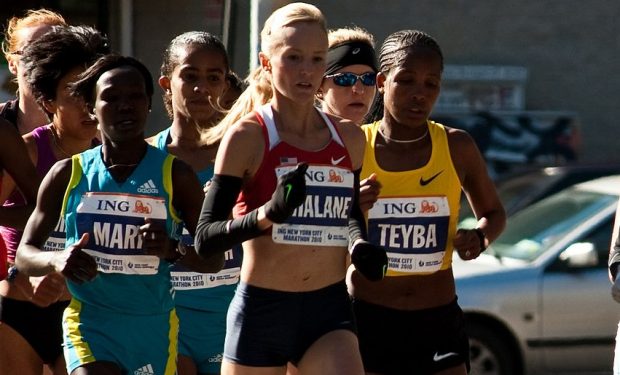 American long distance runner and marathon champion Shalane Flanagan is also a chef. Along with her writing partner Elyse Kopecky, Flanagan hopes to have as much of an influence on how people eat as she does on how they exercise. Hey, if you’re looking for inspiration in the kitchen or on the running trail, you can’t do much better than Flanagan, the American record holder in the 3000 meters (indoors) and 2017 NYC Marathon champion.

Flanagan brings an athletic mindset to the kitchen too. She doesn’t beat around the bush with her recipes, but instead gets right to what people really want: healthy meals that can be prepared fast. Yup, swift in the kitchen, but not at the kitchen table. Flanagan advocates going slow while actually eating. (It may be the only time the 5’5″ sensation goes slow.) Fortunately for her curious readers, Flanagan gets specific about how she makes her meals work for her. She told a crowd gathered for her book signing in NYC exactly what she eats before she toes the line at the marathon. Her special formula is her simple Race-Day Oats recipe. (At the book signing she emphasized steel-cut oats.)

INSTRUCTIONS: Combine oats, banana and ¾ cup water in a microwaveable bowl. Microwave on high power for 1–2 minutes, or until thickened. Mash banana slightly and stir in milk, walnuts or almond butter, and raisins or berries. Top with a sprinkle of cinnamon and a drizzle of honey.

Who is your biggest fan? I say, be your own biggest fan. Self belief is powerful.