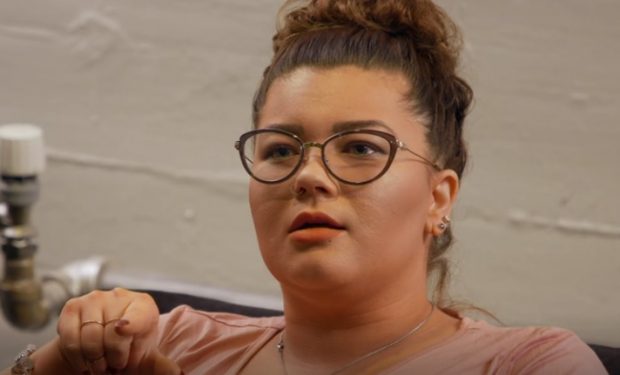 On the Season 7 Teen Mom OG episode “New G’s Meet the Old G’s,” all the moms fly to New York for press week. OGs Amber Portwood and Catelynn Lowell meet outside their Manhattan DREAM hotel and take a car together to the set where they will meet the others. Amber says she has concerns about meeting the new moms “since MTV never called me personally to tell me they were joining the show.” The new moms are Cheyenne Floyd and Bristol Palin, daughter of former Alaska governor Sarah Palin.

While in the car to the studio, Amber initiates a live conversation with her fans via her smartphone but when a fan asks her for her thoughts on Bristol Palin, Amber whines, “No, don’t do that right now. It’s too early, guys. It’s too early for those questions.” She complains, “This is why I never do this stuff!” When Amber and Catelynn arrive at the studio, Amber demands to meet the new moms before they’re “thrown together on the set.” Amber points her finger at producer Jeff and says: “There’s been a lot of things that have happened in ten years on this show from my f—king life that I’ve let you guys watch that’s been really personal.” This is where she gets choked up, “So I need that respect back.” The producer agrees “you’re right” but Amber repeats, “We would really like some f—king respect.” It’s like she’s filmed her life for free, out of the goodness of her heart. Teen Mom OG airs Mondays at 9 pm on MTV. [Related: ‘Teen Mom’ Is Bristol Palin’s 6th Reality TV Show In 8 Years]