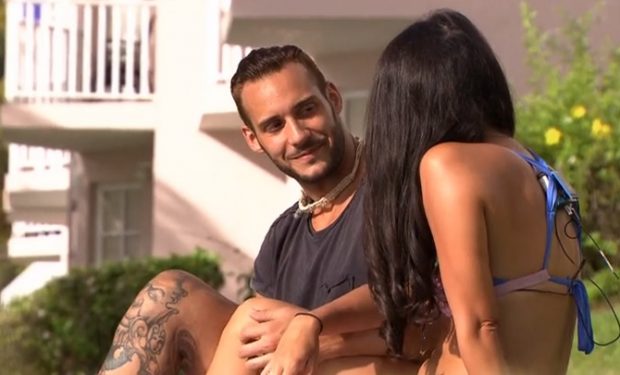 In the Married at First Sight: Honeymoon Island episode “Blinded By Love,” it’s Day 10 on the island which means the five couples are halfway through their experiment on the gorgeous tropical island of St. Lucia. While Pastor Calvin says Jona and Brandin are “the most improved” couple, Shannon and Chris don’t see it. They worry that Jona is getting played.

While playing pool, Shannon and Chris ask Jona some tough questions. Shannon says he always hears about Jona worrying about if Brandin is comfortable, “What is she doing to make you feel comfortable?” Everyone knows Jona is a good guy. Chris agrees and tells Jona she should be making him feel good too. “He should at least receive the same effort that he’s putting out. It should be 50/50,” says Chris. When Shannon says he wants Brandin to go hard for Jona, Jona says “But that’s your way. I don’t feel weird falling on my face.” Shannon shakes his head. Chris asks Jona, “If you left right now,  would she come after you and try to stop you?” Jona looks scared at the thought. He says she would want to know why. Oh, Jona.