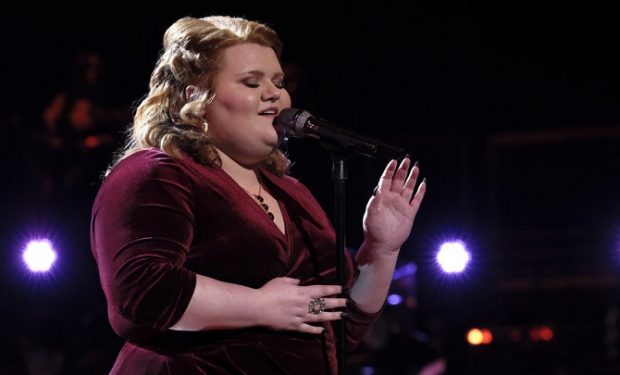 It’s down to the Top 13 on Season 15 of The Voice. Each coach has just three artists left and they’re all performing live on Monday, November 19. The female singers have a leg up: out of the Top 13 artists only 5 are male (and 3 of them are on Blake Shelton’s team; the other two are on Adam Levine’s team). Jennifer Hudson has a great chance of winning with any of her three artists: 13-year-old Kennedy Holmes, 36-year-old mom SandyRedd, and 20-year-old Kentucky native MaKenzie Thomas.

[Download any or all Jordan Smith songs on The Voice]

Many Voice fans are rooting (and voting) for MaKenzie because they like that she “doesn’t do the screaming thing but just sings!” She’s not a showman like SandyRedd on stage: MaKenzie doesn’t dance around on stage and sling her hair around to entertain the crowd. She just relies on her voice and the emotion she brings to a song. Some are calling her “a female Jordan Smith.” (Fellow Kentuckian Jordan Smith won Season 9 with Adam Levine.)

Listen and watch MaKenzie sing the Whitney Houston song “I Believe in You and Me” at the Live Playoffs. She didn’t move from the microphone but had both Jennifer Hudson and Kelly Clarkson standing on their feet, throwing shoes (in admiration) on the stage. The Voice airs Mondays and Tuesdays at 8 pm on NBC.